Who would have thought that a minor flaw in the food processing activity can cost a country on such a massive level? Yes, you heard it right!

The unsafe food practices have had a huge impact on India as much as $15 billion which is supposedly half the amount ($28 billion) incurred last year. This report has been generated by World Bank depicting the economic burden caused by FBDs (foodborne diseases)

FBDs are foodborne diseases caused by pathogenic bacterias, viruses, or parasites that contaminate food during the preparations. Other food borne diseases are essentially poisonings caused by toxins, chemicals contaminating the food. 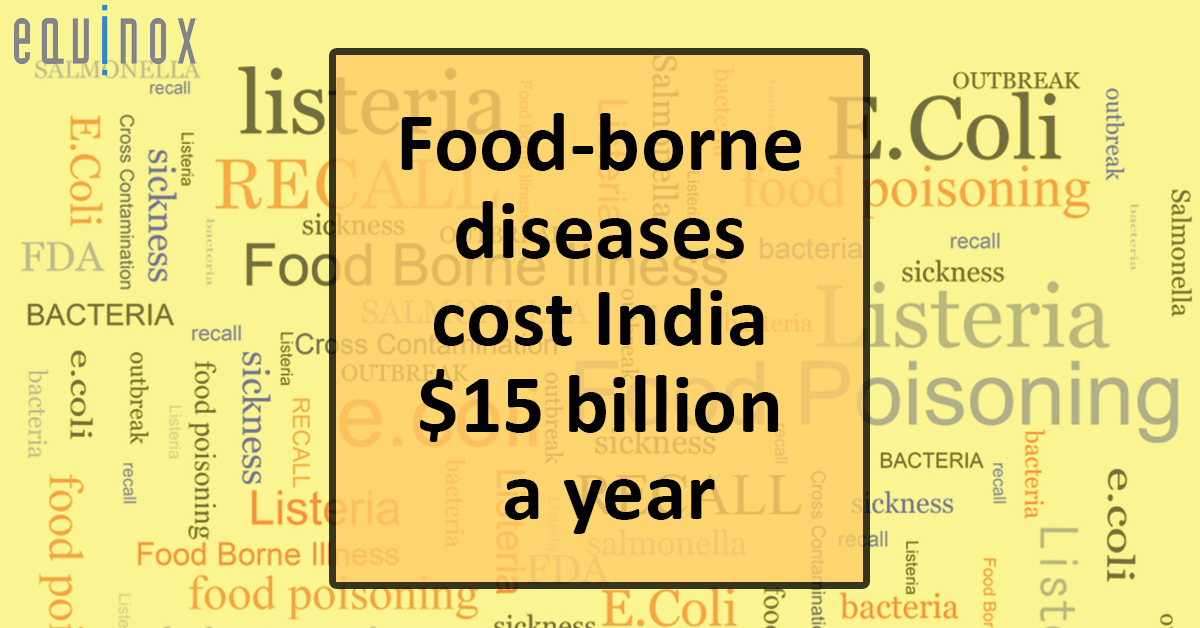 However, the reasons for the fall of costs incurred in the current year are several. It is a matter of pride that the country has eventually become conscious of food safety which relatively brought down the FBDs and the costs. But, the economy still suffers with the current percentage of FBDs estimated in the country. The potential impact of food safety outbreaks on an FBO can be devastating. It can bring unimaginable economic losses. An increase in the globalized food trade in recent years, extensive production often involving many sites and a complex supply chain all contribute toward an increased number of microbiological food safety outbreaks.

Animal source foods estimated to account for 21% of India’s food borne diseases burden, whereas it accounts for 59% in China. The World Health organisation recently organised the food safety conference wherein they discussed about “The Safe Food Imperative” report.

India has been at the front in recent years with its efforts to streamline the food safety regulations to achieve food safety and hygiene in the country. According to the reports, better health and commercial outcomes are possible with the joint involvement of public agencies, businesses, and consumers in food safety.

Food Safety is important for the masses, economic development and social stability, and the government’s and country’s image.

The contribution of FSSAI in bringing down the adversities have been huge because of the onboarding of several food regulations. With the strict actions taken against restaurants, FBOs, and roadside eateries it has been possible to achieve food safety in the every corner of the country. FSSAI with its nationwide initiatives such as the ‘Eat Right India’ movement and ‘Swastha Bharat Yatra’ were influential in battling the grave issues. Eat Right India emphasized the youth to reduce the intake of high sugar, salt, and fats by creating Aaj Se Thoda Kam tagline to ensure food safety. Whereas, Swasth Bharat yatra was a cyclothon which was organised across 100 cities to encourage healthy lifestyle.

According to Ashwin Bhadri, CEO of Equinox Labs “A comparative study of the costs incurred due to the FBDs with each passing year is commendable. Even though the numbers have decreased, the country still has to achieve the FBD free mark in the coming years. The journey of India from $28 billion to $15 billion has not been easy and smooth. The food safety regulations which were streamlined on the recent years such as packaging and labeling laws, used cooking oil, nutraceuticals, etc contribute a lot towards the objective of food safety.”

The FBOs and the manufacturers have to be careful and responsible in avoiding any contamination that can lead to FBDs. Also, a major chunk of the population that relies on outside eateries have to be extra cautious while consuming these foods. However, with FSSAI implementing a series of measures pertaining to packaging, labeling, nutraceuticals, used cooking oil and many more have been influential in uplifting the consumer health quality. With the help of productive steps such as FSSAI creating public awareness, FBOs abiding by the laws and government taking stringent actions can reduce the burden of the FBDs in the country, he added”.

Considering the available facts and figures, it is important that the government continues with the food safety drive across the nation with its various initiatives and makes India a safer place in terms of food safety and hygiene.